Graestone, a forum poster at Happyhippie.com, attended the free screening of Waiting to Inhale at the San Diego Central Library.

The number of folks that showed up for the free screening of Waiting to Inhale filled up the theater, and staff had to put up several extra rows of chairs to accommodate the overflow, with others yet in the hallway outside peeking over shoulders to see in.

Too close to home for many of us here in San Diego is where this film hit many of us, too many instances therein reminded us of ourselves and too often did I hear sobs of not only recognition of the faces on the screen that are no longer with us and people openly weeping and passing tissues from person to person as personal tragedies unfold on the screen, but sobs for our city, our State and what it has become as well.

San Diego is the front line in the fight for Medicinal Cannabis and the city one of the last hold outs in implementing State law on the Medicinal Cannabis identification cards as decreed by the California Supreme Court in October 2008, and yet nothing has been done.

Much is happening in this so called War on Drugs that never hits the main stream media simply because of the outrage it would stir up should the truth ever come to light. Stories of entrapment by the DEA in at least five cases here in the San Diego area in the last week alone, two raids that I personally know of and both of them private residences of caregiver growers that supply medicinal Cannabis to those that are unable to supply their own.

In they come clad in black with full riot gear, automatic weapons, masks, battering rams, the whole works, while “Mom” stands there in slippers, bathrobe and coffee cup in hand, stunned that something like this could happen in America after she’s been forcibly introduced to the carpet finding a boot in the back of her neck.

They take what they want, destroy the rest (which happens to be peoples lives) and leave to terrorize the next law abiding citizen with impunity.
Waiting to inhale not only shows our side, the medicinal Cannabis users side, but also shows what the other side, the federal government, has to say as well, allowing the viewer to come to his or her own conclusions.
We are not evil people, and we don’t run multi million dollar cartels, we’re your sons, mothers, teachers, clergy and yes, even police, who do our jobs, pay our bills and taxes and struggle to stay on top of things just like everyone else in this country.

All we want is to be able to continue to live our lives free of pain, free of fear and persecution, free to see our children and grandchildren to grow into wonderful adults that are not blinded by misconceptions, misinformation and prejudice.

Free to live in peace, not much to ask for really.

If you or any of your family members suffer from an ailment that could possibly be alleviated or eased in any way by Cannabis, I would entreat you to research it for not only your/their sake but for all those that are still under the umbrella of misinformation about the efficacy of Cannabis.
Watch this movie, buy this movie, pass it along, invite your friends and family to see this movie or add it to your website if you have one, but pass it along in any way you can, America needs to see this. 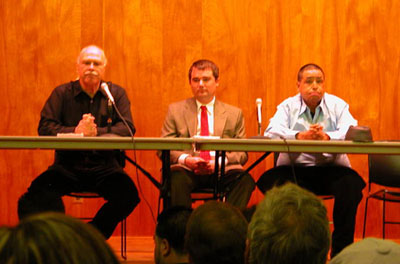 From left to rightP: Jed Riffe (producer/director) Aaron Smith (from the Marijuana Policy Project) and Rudy Reyes (local activist, burn victim of the Cedar fires a few years ago and ran for city council to oust some of the incumbents)

Thank you to Graestone from Happyhippie.com for contributing to this article.